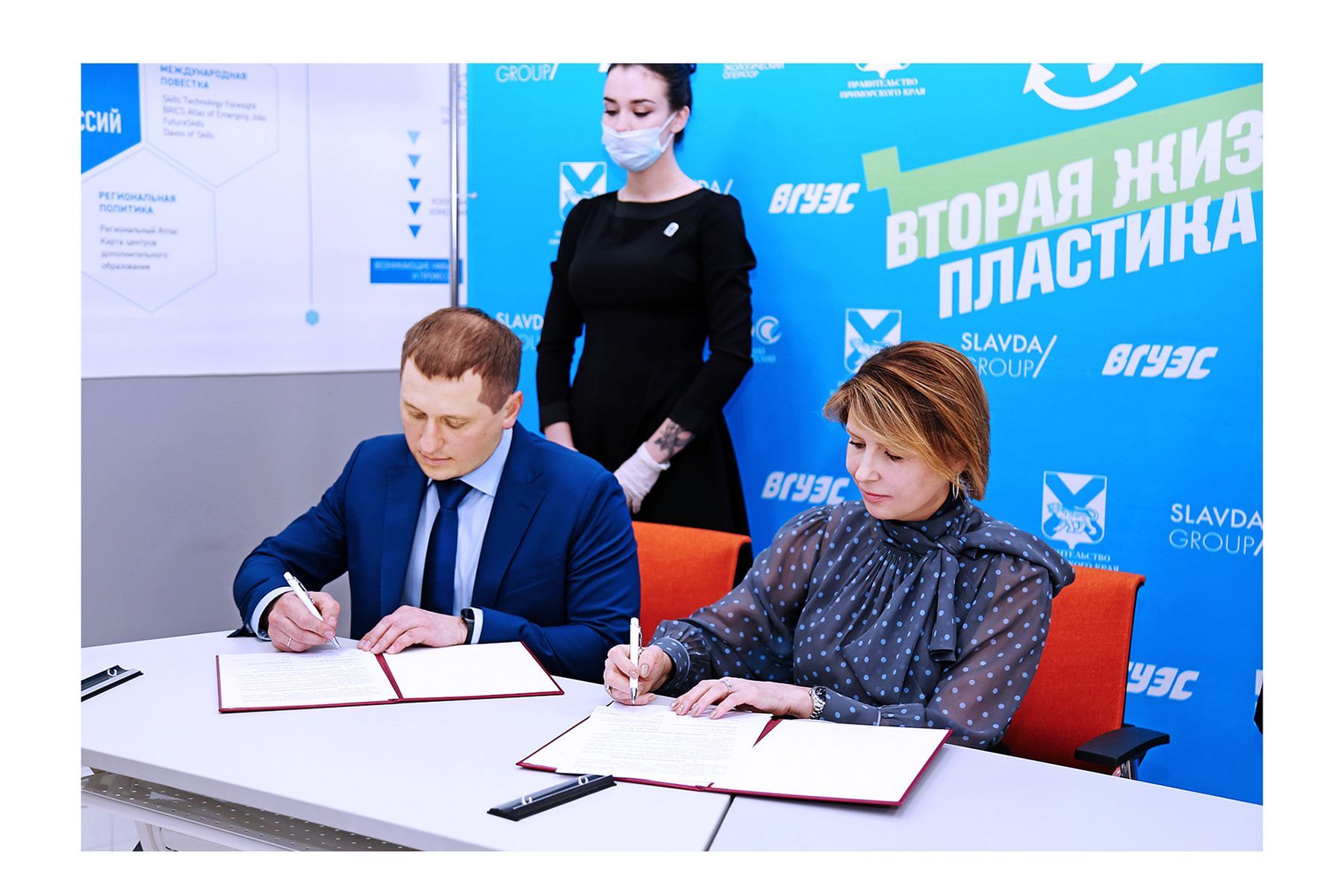 Rector of VSUES, Doctor of Economics, Professor Tatyana Terentyeva signed an agreement with «the Slavda» company on cooperation in the field of ecology and healthy lifestyles. The official ceremony was attended by: Deputy Prime Minister of the Primorsky Territory Elena Parkhomenko, General Director of KSUE «Primorsky Ecological Operator Anton Bibikov», Chairman of the Board of Directors of Slavda Pavel Serebryakov, General Director of the company Roman Antipiev, Project Manager Ekaterina Kotlyar, as well as representatives of volunteer organizations , students and staff.

Group of companies «the Slavda» presented a presentation of the social and environmental project «The Second Life of Plastic». The project sets itself two ambitious goals: the creation of an infrastructure for the separate collection of waste and educational activities to introduce a culture of handling materials that are subject to recycling. VSUES became one of the first sites where a new type of compact container was placed to collect used plastic bottles. Such containers have appeared on the territory of VSUES and the «Champion» sports complex on Gogol. In the future, more than 200 modern containers for plastic waste will be installed in schools, universities, shopping centers and popular public spaces.

Also, a network of pandomats will be created- devices for receiving plastic. This is really something new for the Far East. Such machines are common in Europe and are just beginning to appear in the western part of Russia.

Rector of VSUES, Doctor of Economics, Professor Tatiana Terentyeva emphasized the importance of the university's participation in such initiatives:

- The project «Second Life of Plastic» is not only the separate collection and recycling of plastic waste, but also outreach work. The International Institute of Tourism and Hospitality VSUES trains specialists in the field of ecology. In the future, this area will actively develop, and environmental projects will become not only in demand, but also economically profitable. Five thousand people study at our university, and if we tell and show how to solve environmental problems, explain why it is needed, people will carry it to the external environment, to their families. It is a question of the general level of education, culture of the population and life of all of us in an ecologically clean environment.

Within the framework of the agreement signed between VSUES and the «Slavda» group of companies, joint research in the field of nutrition, sports and ecology is planned; educational activities aimed at increasing environmental literacy; implementation of practical environmental solutions.

The Department of Ecology and Tourism of VSUES and the Basic Department of Ecology and Environmental Problems of Chemical Technology of VSUES together with the company «Slavda», the specialists of the «Primorsky Ecological Operator» plan to cover more than 100 thousand preschool, school and higher education students by 2023 as part of an interactive educational program.