VSUES and the University of Economics and Finance of Mongolia: cooperative research and educational projects

An online meeting was held with a new partner of VSUES - the University of Economics and Finance (Ulan Bator, Mongolia). The conference began with a greeting from the Rector of the University of Economics and Finance, Mr. Byambadash Munhbayar. He expressed the hope that our universities will find as many points of contact and interaction as possible in all areas of activity.

Vice-rector for academic and educational work of VSUES Sergey Golikov supported the words of the UEF rector and also expressed hope for the development of productive cooperation between our universities.

During the meeting, the parties introduced each other to their universities, making presentations and talking about the main areas of work. They also discussed the possibilities of cooperation in various areas - from educational to scientific activities (joint publications in scientific journals, implementation of joint educational programs, and implementation of academic exchange programs).

At the end of the meeting, Sergei Golikov noted:

- We see that there is mutual interest and are ready to cooperate both in the framework of joint scientific research and in organizing joint work in the implementation of educational programs.

Byambadash Munkhbayar, rector of the FEU;

Imideeva Irina Vladimirovna, Head of the Department of Eurasian Cooperation, Innovation and Development;

Petruk Galina, Director of the Department of Scientific Research;

Yulia Chebova, Director of the Department for Academic and Educational Work;

Semin Petr, Director of the Department of International and Cultural Affairs. 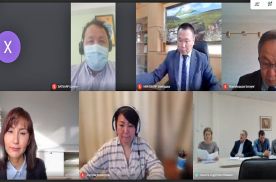 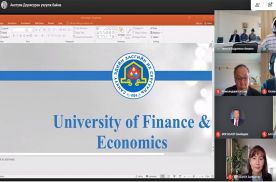 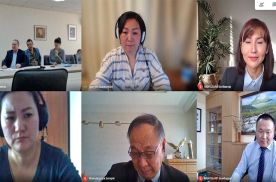