Young scientists are supported by the state and the university: the XXIII International Scientific and Practical Conference was opened at VSUES 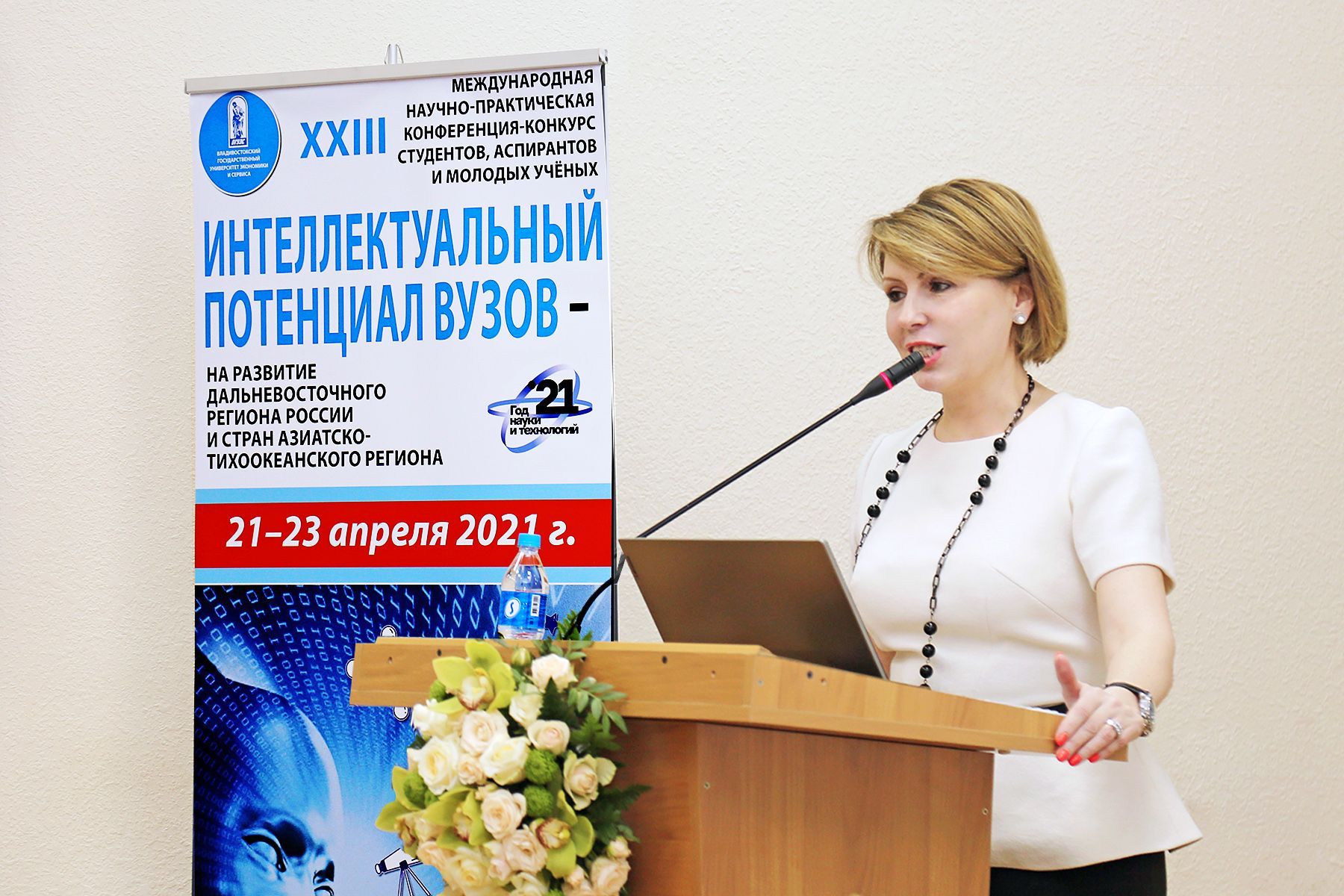 For 23 years, VSUES has been hosting an International Scientific and Practical Conference, where students and postgraduates deliver reports representing the most relevant achievements of scientific thought in priority areas of economic and social activity. Participation in the discussion platform gives young scientists the opportunity to exchange scientific knowledge and propose effective ways for the development of the Far Eastern region of Russia and the countries of the Asia-Pacific region.

The XXIII International Scientific and Practical Conference "Intellectual potential of universities - for the development of the Far Eastern region of Russia and the countries of the Asia-Pacific region" opened on April 21st. The VSUES Rector, Doctor of Economics, Professor Tatiana Terentyeva, greeted the conference participants. She noted that she has been working at the university for 26 years and can say with confidence that every year the conference becomes more and more interesting - in terms of content, quality, topics. The VSUES rector advised young researchers not to be afraid to make mistakes and step by step towards their goal.

“You have great prospects,” Tatiana Terentyeva emphasized. - Today science is not only a fascinating and unusually interesting activity, but also an opportunity to commercialize your projects. You can make a name in science and make money. This is a worldwide practice.

The rector of VSUES also noted that the government of the Russian Federation also intends to strengthen support for young scientists under the age of 35. In the near future, a number of stimulating measures will be adopted at the legislative level. Including the system of grants, housing certificates, preferential mortgages.

Tatiana Terentyeva awarded the students who showed the most serious scientific results. Out of more than 50 participants in the competition, diplomas were received by:

- Master's student of the Department of International Marketing and Trade Angelina Blyudik,

- student of the direction of training "Jurisprudence" Yekaterina Gomzyakova,

- Master student of the Department of Economics and Management Anastasia Zaitseva,

- student of the direction of training "Ecology and nature management" Valeria Tkalich,

- student of the direction of training "Management" Lev Stavnichy.

Receiving the award from the rector, Lev Stavnichy emphasized that his interest in scientific activity arose in his first year, when at the conference he successfully delivered a report written under the leadership of the head of the Department of Economics and Management Tatyana Varkulevich.

The reports on how the fields of economics, medicine, law, psychology are being transformed under the influence of digital technologies and what prospects for the development of the region such a transformation opens up were made by graduate students, students and even students of the VSUES Academic College.

Undergraduate student of the Department of International Marketing and Trade Angelina Blyudik proposed a project to modernize the management of the logistics activities of the seaports of Primorsky Krai on the basis of digital technologies, and postgraduate student of the Department of Mathematics and Modeling Rodion Rogulin developed methods and models for the effective functioning of resource-supporting subsystems of timber industry enterprises.

Some scientific research has been carried out within the framework of an interdisciplinary approach with the aim of comprehensive and adequate consideration of complex processes and the creation of working models. For example, students of the Department of Mathematics and Modeling Andrei Vishnevsky and Georgy Zavalin developed a model for predicting obstructive coronary artery disease using machine learning methods with the consultation of doctors from the city clinical hospital No.1.

A study at the intersection of medicine and jurisprudence was presented by Olga Kotlyar, a student of the Institute of Law. She studied violations of citizens' rights in the provision of medical services.

Andrey Parkhomenko, a student of the Department of Information Technologies and Systems, presented the design development of an interactive exhibition stand "glove-remote" on the Arduino platform.

The current stage in the development of the humanities was recorded in the reports of Varvara Malakhova, an assistant at the Department of Philosophy and Legal Psychology, who studied how the self-disclosure of adolescents' abilities affects academic performance, and a student of the Institute of Foreign Languages, Ilya Shulga, whose object of research is interlingual transformations in modern socio-political discourse.

The youngest participant in the plenary session was Elizaveta Malkina, a 9th grade student of the Academic College of VSUES, with a report “Linguistic analysis of the features of selling texts”.

- The conference is an important event in the life of our university, especially in the year of science and technology, which will undoubtedly contribute to the improvement of the process of scientific research and create incentives for further fruitful work, - summed up the plenary session, the director of the research department of VSUES , candidate of pedagogical sciences, associate professor Galina Petruk.

In the next two days, scientific sessions will be held at all departments of the university. In total, the program has 28 sections, exploring various fields of knowledge in the natural sciences and the humanities.